A DIY fix for a cracked, broken phone screen

Or, how I cracked and then fixed my broken phone screen

I fixed a smartphone with a smashed screen. It was tense. Mistakes were made. It wasn’t hard per se, but I wouldn’t call it easy either.

We had a Moto G5 Plus whose screen was mysteriously broken.

For about $90, we bought this replacement screen and digitizer along with all the tools to do the replacement. Thanks to iFixit for the equipment and the step-by-step Moto G5 Plus screen removal tutorial we followed in doing the repair. 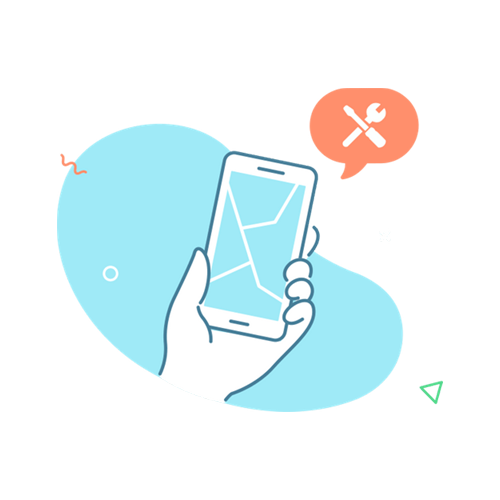 Broken phone? Your repair is on us

Got a broken phone?

Ting is the mobile provider that supports your right to repair. If you’ve got a broken phone, you can get it fixed, bring it to Ting and we’ll credit your new account for the cost of the repair, up to $150.

This video is clearly not meant to be an exhaustive guide on how to replace a broken screen. Rather, we wanted to pull the curtain back on the process a little. To show that it can be done. Replacing this broken phone screen wasn’t easy per se but again, it can be done.

“More haste, less speed,” as mother used to say. Repairing a broken phone screen (or replacing the battery or whatever) requires a clear workspace, patience, a steady hand and a little nerve. Take your time. Read / watch through the whole repair process at least once so you know what you’re in for. Then go for it!

The process is a bit different for phones and different manufacturers put them together in different ways. That said, disassembling a phone to remove a broken phone screen typically shares these basic steps in common.

Now, we’re basically reversing the process to put the once broken, soon to be repaired phone back together.

Altogether, we spent about 1.5h doing this repair. Our situation is somewhat complicated by the fact that we’re recording the process. Having done it once, I feel confident I could hit the 30-minute mark that iFixit suggested for the low end for this particular repair.  We ended up breaking the repair process up over two afternoons because of competing priorities. Bet you didn’t even notice the wardrobe change.

Our repair was rated as “moderate” difficulty. I don’t think I’d attempt anything rated above that unless I had nothing to lose.

Should you fix a broken phone yourself?

If you watched the process we outlined and thought “I could do that” then yes, you should. We really liked the Moto G5 when it first came out. The Moto G5 Plus we repaired was a perfectly serviceable phone, save for the fact that someone put a hammer through its screen in a bid to make an arresting YouTube thumbnail. In other words, it was worth repairing.
The best advice we can give is to go to iFixit and punch the name of your phone (or whatever it is you want to repair) into the search bar. See what the process is like and determine if you have the stomach for a DIY job. If not, you can always find a reputable repair shop near you and find out what they’d charge to do the work.

We also turned on our phone on and tested the repair before we installed the new adhesive.

Our repair in summary

Replacing a display wasn’t easy, but it wasn’t very complicated either. Having the right tools and the iFixit guide definitely made it feel more accessible. iFixit kits being readily available is just one more reason why Motorola phones are awesome.

Whether you’re ready to undertake a display replacement yourself or you prefer to take your phone to a local repair shop, you can bring your recently repaired phone to Ting and get credit back for what the repair cost you. Learn more and visit our promo site.