Update: The sixth Golden Ticket was found! Congrats to Judith K. of Washington and all our winners.

As a reminder, we recently stuffed three of our sweet, new reusable Ting shipping portfolios with Golden Tickets. We also sent three digital Golden Tickets to random “bring your own devicers”. All Golden Ticket winners received $400 in Ting credit which, based on the average Ting bill, should offer about a year of free service.

One of the best things about running goofy contests like this is that we end up meeting a few more of our customers. We get to hear about why they came to Ting and how things are going so far.

Jeff F. in California had a great story. He decided to come to Ting to save some money and bought the cheapest smartphone he could find on our site, the Refurbished LG Optimus S. Just as he did that, a friend offered him an eligible HTC EVO. He gladly accepted but was kind of bummed that he wasted the cash on the LG Optimus S. Then it arrived with a $400 credit! Best return on any investment he ever made.

When I spoke to Jeff, he was having some trouble canceling his account with Virgin and bringing his phone number over to Ting. He was concerned that he might have messed up the timing and lost his number forever. I said, “No problem, Jeff, call our Support team, we’ll walk you through the whole thing and make sure everything is fine.” He said, “Ugh, I’ll call, but I just know I’ll be left on hold for six hours.” I love it when people say stuff like that! Man, it’s so easy to be shockingly good in this industry. I talked to him the next morning. He had been lucky enough to get Kenisha on the phone. (I would say Kenisha is the best Customer Rep we have at Ting, tied with about 30 other Customer Reps.) He and his phone number are with Ting and doing great. 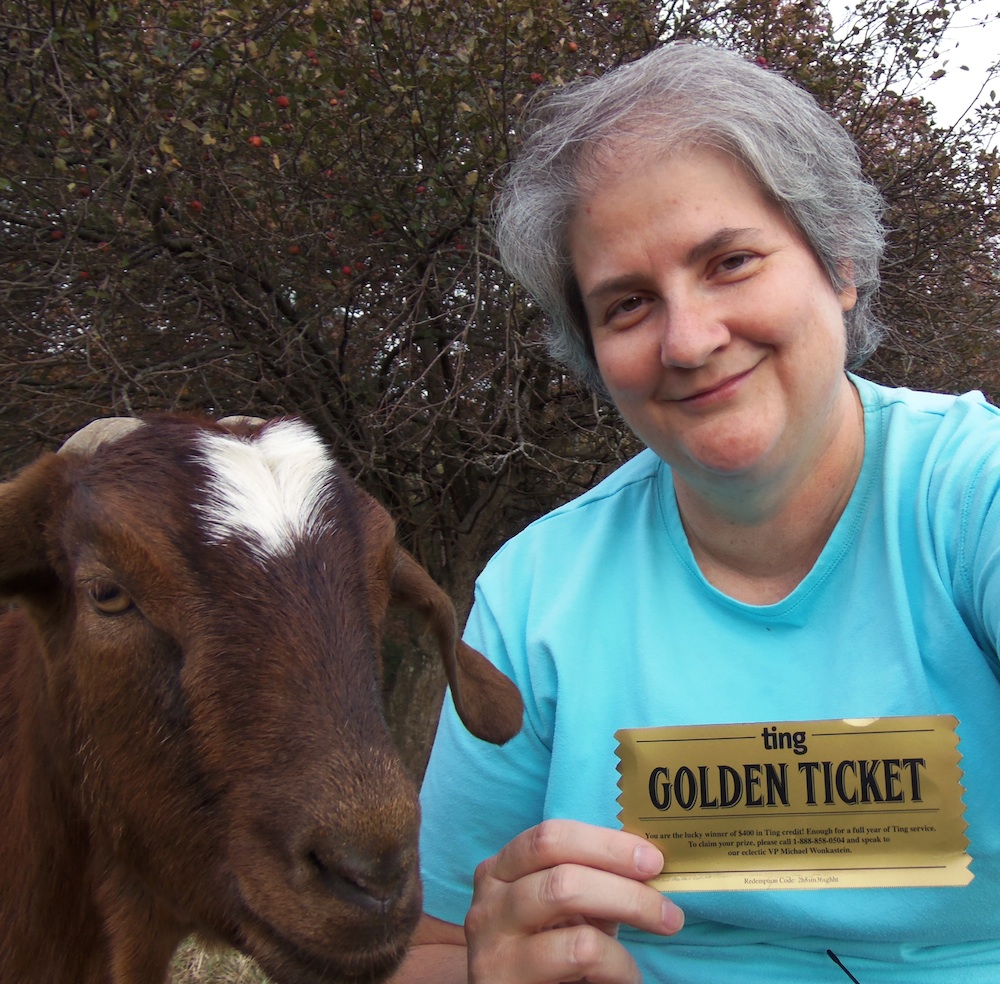 I was also delighted to meet Sandy C. from West Virginia. Sandy and her family use very little data and were wasting money with plans that essentially force people to buy fixed amounts of voice, data and text that they don’t need. She admitted that our coverage is not ideal for her out there. But being able to pay for just what she uses was worth a bit of a sacrifice. And she is rightfully hopeful that it will get better.

Funny story. I was talking to Sandy on her Ting phone and we were having an awful time hearing each other. I’m screaming, “Congratulations Sandy!!!! How are you enjoying Ting so far??!!” After a about thirty seconds of this, I said, “Wow, Sandy, this is terrible, I don’t want you to live like this!!! If we don’t  have the coverage you need…” Just then, Sandy’s voice came through clear as bell and said, “Sorry about that, I was just looking for something in the basement.” I cracked up. So not that great, but not that bad.

I asked Sandy to send me a cute photo of herself and the Golden Ticket. She sent this photo and explained, “You asked for a cute picture of me and the ticket. Well I don’t do cute so much, but I included my goat Violet to add some humor anyway. The goats appreciate the win too, cookies for everyone!”

Catherine gushed for about 10 minutes about how wonderful we are. I laughed about that. I figure you can suck pretty badly and then give someone $400 and there’s still a good chance they’ll gush about how wonderful you are. She said had just worked a 24 hour shift in the Intensive Care Unit and we made her day. I laughed again. That shouldn’t be a tough day to make. But we made her happy. That makes me happy.

One bit of data: 3 out of the 5 winners so far have never won anything their lives.