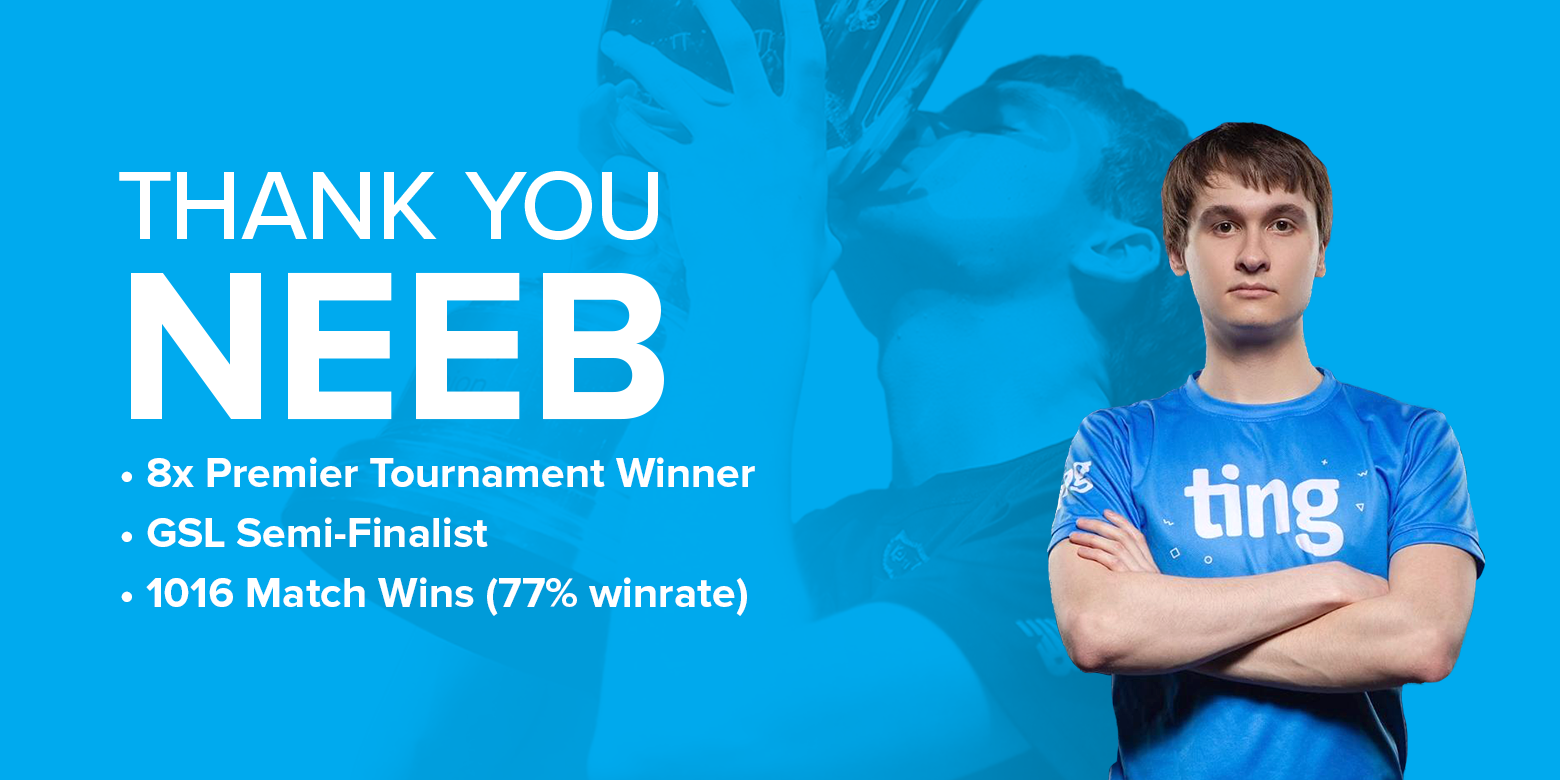 After six years representing Ting Mobile as a professional StarCraft II player, Alex “Neeb” Sunderhaft has decided to step down from competing full-time.

Throughout his exceptional career, Neeb has cemented himself as the greatest American ever to play StarCraft II. In 2016, just five months after signing with Ting, Neeb became the first non-Korean ever to win a premier StarCraft II tournament in South Korea and made headlines all across the world. He then went on to win seven more Premier tournaments (including three WCS championships in 2017) and reached the semi-finals of the Global StarCraft II League in 2018, paving the way for a new generation of international StarCraft II pro gamers (“foreigners”) who could not only stand toe to toe against the best Korean players, but come out on top.

Being a part of Neeb’s astonishing journey has been a dream come true and we couldn’t be more proud of all the success he has achieved over the years. In total, he has won 92 tournaments and over $550,000 in prize money as a Ting-sponsored gamer – talk about legendary.

A remarkably humble individual, Neeb has embodied the Ting Mobile brand through and through, allowing his methodical, calculated gameplay to speak for itself while gaining countless fans in the process. While Alex has given fans hundreds of exciting matches over the years, we thought it would be nice to look back and highlight a few of our favorites that are now considered some of the greatest StarCraft II matches of all time:

Neeb has also written a statement that we’ve shared below:

I am extremely appreciative of all the support Ting has offered me over the years. When I was picked up in 2016, I never would have imagined our relationship lasting so long. That is thanks to Ting and, in particular, my manager Jesse. They have been accommodating and responsive from day one, creating an environment where I could grow as a professional player while not being held back by any trivial issues. Through Ting’s backing I was able to win KeSPA Cup in 2016, collect three of four WCS trophies in 2017, and make my great GSL run in 2018. Even as my career cooled off, they continued to support me the best that they could.

It was a pleasure to represent Ting on all these stages around the world. As I consider a return to studying and with it less of a focus on StarCraft II, it makes sense to end our journey together. I’d like to wish Ting and Jesse the absolute best going forward – they undoubtedly deserve it. Lastly, I’d like to extend my appreciation to all the fans who discovered Ting or gave Ting a try because of me. It is because of you that StarCraft II eSports continues to live on.

Thanks to Neeb for everything he’s done for the esports community and for Ting Mobile, he will forever be a StarCraft II legend. We’ll continue to support and cheer on our American hope in StarCraft II tournaments, and wish Alex all the best in the future ❤️.

Special thanks to Sasha “Scarlett” Hostyn and BaseTradeTV for initially connecting us with Alex.